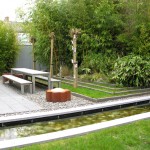 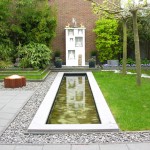 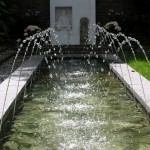 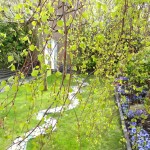 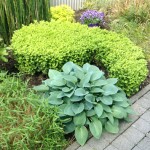 A Buddha temple, borders of pebbles which symbolize rice fields, statues of mandala`s, the Dutch garden of Ineke Otte is not exactly average. There even climb rats into a tree.

But first those ‘rats’, what are they doing in an garden in the Dutch Goes?

‘’The ‘rats tree’ is an art work,’’ explains Ineke Otte, artist and designer.’’ The rats which I have attached to the tree trunk are plastic. It gives an alienating effect. Rats and other animals are an important topic in my work. I use them also in jewellery.’’ But also without those animals the garden behind the house and the studio of Ineke looks far from daily. It is a reflection of impressions she gathered during her trips to Asia, especially to Tibet and the Himalaya mountains. The wisdom, mystique and peace she experienced, was translated into the Dutch clay. With a long narrow pond with twenty fountains, a Buddha temple in the back of the garden, which was built of a remaining lot of stones, white plastered and the choice of plants, such as different kinds of grass and bamboo.

Ineke:’’ From my studio I look at the ‘bamboo forest’. Those murmurous leaves already provides an oriental atmosphere. Very calming. The borders with pebbles are laid down in terraces and symbolizes the rice fields which I have seen a lot during my trips.’’

Through her work and interest for nature it was for Ineke no more than a matter of course to design her own garden. The lines are fixed in boundaries of grey pebbles, they follow the straight lines of the modern house. The fence is made out of steel with a coating of aluminium paint. The contrast she puts in is outstanding, such as the ‘river’ of white carrara marble stones and glass chunks. It meanders through the grass with intention to break the straight lines of the garden with organic forms.’’ Contrasts add something extra. They make a garden exciting.’’ The river symbolizes infinity. You can also find this symbolism in a spiral of boxwood which stands for an endless ongoing motion.’’ Looking at a spiral leads to your inner self, while you let impressions from outside let go by.’’ Next to the boxwood spiral is a birch (Betula). This tree is very important in Celtic symbolism and represents a new beginning. Many statues made by Ineke Otte herself, you can find in her garden, which all have symbolized meanings, such as the mandala and comma.

The square represents the earth and the circle the universe.

This doesn’t mean that the garden is all symbolism. Ineke: ’’ I am also a flower freak, I love colours, my granddaughters call me ‘grandma colour’, a garden without flowers is not okay for me.’’ A large border especially for flowering plants in purple, red and pink.’’ In particular for yearlings as geraniums, pansies and petunias. I would like to have more flowering plants, but that is a lot of work to maintain. And now it is with a base of larkspur and hydrangeas lovely to enjoy the colorful border.’’

Sorry, the comment form is closed at this time.